“Play Hard, Have Fun, Be Prepared for the Next Level” 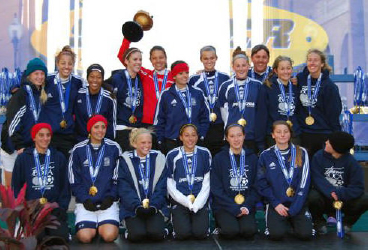 Sports are far more than diagrams and techniques.  Sports and life itself are similar in that each demands a personal commitment to excellence for success.  Success cannot be an occasional or sometimes thing – it is a habit.  To climb to greater levels of success requires dedication, perseverance and most important of all – learning and perfecting the fundamental skills to prepare for the next level.  We believe that perfecting the fundamental skills of the game fully prepare our players to rise to the highest level.

Our soccer philosophy is very similar to that of life – it is one of building and instilling confidence in our players, regardless of the task, to help prepare each and every Team Boca player for their next level.  Next level of soccer and next level of life! Individual player development is our #1 priority!  By instilling confidence by perfecting the fundamentals, the sky is the limit to our attainable goals as individuals and as a team.  Without that confidence, regardless of the task, our success will be limited.  In looking at the game itself, it is the simple skills and techniques that make individuals and ultimately teams successful.  Those simple skills are what separate the average players from those that rise above and make a difference.

We believe firmly in the constant practice and execution of the basic fundamentals; passing, ball control, dribbling, shooting, and heading.  To be able to perform those skills at a high level allows individuals and teams the opportunity to be competitive and successful.   Practices are full of game related situations. Small-sided games that allow players to participate and learn firsthand while doing not watching. Playing is the best teaching tool we have.

As for our system of play, we will incorporate a ball possession concept that allows players the opportunity to express themselves and be creative.  Flamboyant yet with understanding that offense wins games and defense wins championships.

Most importantly is the ability to communicate; be open, honest, and up front with all players.  Every team member has a role.  In order for our teams to be successful, each player must know and accept their role.  We are very open so that each player understands their role, how important that role is to our success, and that the door is always open to discuss that role.

Finally, the important characteristics that our coaches possess are organization, motivation, leadership, an ability to relate with athletes and sound values and beliefs.  We are a club that has a strong understanding of what mental and physical demands are placed on today’s athlete.   Each characteristic is unique, but together they provide a powerful combination of excellence.  Just like our players grow from year to year, we will continue to grow and improve as coaches right along with them. Preparing our players for the next and highest level of the game is our main priority.  We take great pride in the fact that Team Boca is nationally recognized as a Premier College Prepatory program and college coaches across the nation consistently recruit Team Boca players.  Team Boca has earned a national reputation as a leader in college placement!