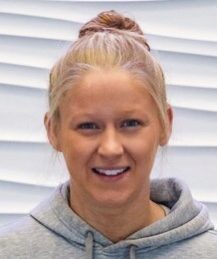 Welcome back Lauren Reilly to our Girls Coaching Staff

Coach Lauren returns to Team Boca in 2021 as our Girls Director of Fitness. Lauren is a Team Boca alum herself, and a former collegiate and professional player who is also currently in her second season as the assistant coach at Palm Beach Atlantic University where she specializes in team/individual technical training and soccer-specific strength and conditioning.

Coach Lauren attended Fairfield University in Connecticut, a Division I school, where she served as team captain and was a multi-time First Team All-MAAC & NSCAA All-Northeastern Region Team honoree during her collegiate career. Following her graduation from Fairfield in 2013, she played for the Boston Breakers Reserves Team and the New England Mutiny of the NWSL & WPSL; and later went on to play professionally with First Division Team, Hovas Billdal, in Goteborg, Sweden.

Following her playing career, Lauren briefly returned to South Florida to accept the varsity girls soccer coaching position at her high school alma mater, St. Andrews. As a player she helped lead St. Andrews to a State Championship in 2007, and reach the State Finals in 2009.

After the conclusion of the 2014 high school season, Lauren moved to Los Angeles, Calif., where she worked as a technical trainer and fitness director for Beast Mode Soccer–a world-renown soccer training company specializing in individual technical development. While in California, she also served as the head coach of the Westside Breakers Girls U13 club team.

In 2015, Lauren returned to her hometown of Boca Raton, where she further expanded her coaching resume at the semi-professional, club, and college level. She served as an assistant coach and head strength and conditioning coach for Lynn University’s women’s soccer team during their 2015-2016 season; staying on to direct the team’s strength and conditioning program during their 2016 and 2017 off seasons.

Coach Lauren’s on-field work then continued as our Fitness Directer at Team Boca, the position that she’s now returned to in 2021. As Fitness Director, Lauren coordinates and leads weekly on-field fitness sessions (focusing on injury prevention and speed, agility, strength, and endurance development) with all of our club’s girls’ teams. soccer seasons.

Lauren has also played for and served as the assistant coach and head strength and conditioning coach for our club’s semi-professional WPSL side, the Team Boca Blast. Lauren has also coached at Rise FC, a competitive club in Jupiter, Fl., where she was also the head of fitness and conditioning for the club—working with both the youth boys’ and girls’ teams.

Off the field Lauren has also worked as a personal trainer and sports performance coach at Impact Sports Performance in Boca Raton, where she specialized in soccer-specific strength and conditioning training and worked with male and female athletes at the youth, high school, collegiate, professional, and international levels.