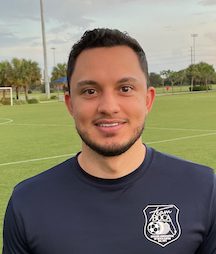 Coach Jorge was born in San Jose, Costa Rica and started playing soccer at a young age. As a youth player, he joined Team Boca at the age of 12, winning the FYSA State Championship in 2011 and participated in the US Regional tournament. In 2012, his Team Boca team once again reached the State Cup Final Four. Coach Jorge immediately joined the coaching staff in 2013 to share his experience with others.