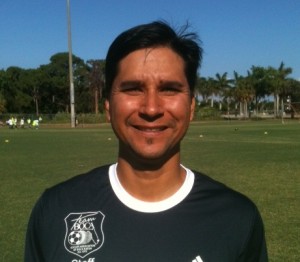 Caoch David was born in B’Quilla Colombia. He grew up playing soccer in Miami where he excelled as a forward at Miami Springs Senior High School.  In 1988, he was the team’s top scorer and helped lead the team to the 1988 GMAC title.  He played his club ball for the Miami Springs Showtime and was a key member of the 1989 U19 FYSA State Championship team.

Coach David attended Miami Dade North Community College on a soccer scholarship and earned MVP honors on the team that won the 1991 FIU Invitational.  His Junior College team also won the 1991 NJCAA SE Regional Championship and placed 3rd in the NJCAA National Tournament.  He continued his college career at FAU and graduated from FAU with a BS in International Business and Marketing.

This entry was posted in Uncategorized. Bookmark the permalink.