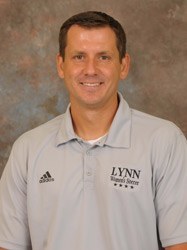 Sheridan “Chip” Dutchik is a great addition this season to our Team Boca staff and will coach our Girls U18 White team.  Chip will also begin his second season as the Head Coach of the Lynn University women’s soccer team.  Chip got the most out of a small roster in his first year with the Blue & White.  Posting a 9-9-0 overall mark, Lynn notched one victory over a top-25 team, took down rivals Barry and Nova Southeastern, reached the Sunshine State Conference Tournament and earned a NSCAA top-25 ranking (No. 22) for the first time since 2004.  In addition, the Knights received three All-SSC selections and five All-Region honors, the most since the 2005 season.

The St. Louis, Mo., native arrived in Boca Raton after serving as assistant coach for NCAA Division I Missouri State for three seasons where he was involved with all-aspects including recruiting, training and travel coordination.  During his time with the Bears, they went 26-27-6, reached the semifinals of the Missouri Valley Conference twice and had 23 student-athletes earn All-MVC honors.

Chip started off his coaching career at his alma mater Missouri Baptist.  He worked as an assistant men’s soccer coach with the Spartans for two years before becoming MBU’s head women’s soccer coach in December of 2004. During his two years with the Men’s team the team won the AMC conference championship and was nationally ranked both years. In his only year with Missouri Baptist, he went 11-10, won the American Midwest Conference tournament title following a second place regular season finish and took his team to the NAIA Region V Tournament for the first time in the school’s history.

In addition to his collegiate coaching experience, Chip is well-versed in the club soccer realm.  He managed the Metro Strikers Club, the U-15 Metro United Soccer Club and assisted with the Saint Louis Soccer Camps.
Chip himself was a product of the Busch Soccer Club in St. Louis, Mo. He played his college soccer career at Missouri Baptist University where he led the Spartans as captain for two years and was also the recipient of the 2002 Player of the Year award.  Chip received his degree in kinesiology from Missouri Baptist in 2004 and is currently pursuing a master’s degree in education with an emphasis on sports management.

Chip is married to the former Leah Gamblin.  The couple has a daughter, Madeline and another daughter on the way this summer.  He is nationally licensed coach from both the NSCAA and USSF.

This entry was posted in Uncategorized. Bookmark the permalink.