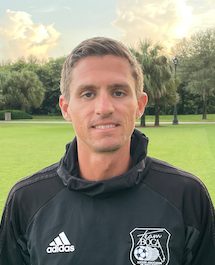 Anthony joined the Team Boca staff in 2017. He is a three-year letterwinner (2009, 2012-13) as a member of the Fighting Knights. He is currently the Assistant Coach at Lynn University. In 2014, he became the first coach in program history to win a national title as both a full-time coach and student-athlete. The former striker championed the Fighting Knights to the NCAA Division II National Championship in his first year on the bench and two-years after helping Lynn win the 2012 national title.

Patrolling the sidelines as an assistant is nothing new for Desperito as to the Bayport, N.Y., native served as a student-assistant for the 2011 NCAA Tournament women’s soccer program. While assisting then head coach Chip Dutchik, Desperito helped oversee the development of Sunshine State Conference Player and Offensive Player of the Year Melissa Ortiz. Desperito holds three degrees from Lynn University, earning a Bachelor’s of Science in Sports & Recreation Management in 2012 and a Masters in Business Administration with an emphasis in Financial Valuation and Investment Management in 2013 and Masters in Science for Criminal Justice in 2014.