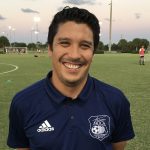 Coach Tyler joined Team Boca in 2012.  He played his high school ball at T.C. Williams in Virginia and graduated from Randolph-Macon College where he played his college ball, earning the Randolph-Macon Men’s Soccer Picarde Award in 2011-2012. As a player, his club team won the Virginia State Cup in 2007-08.