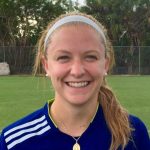 Welcome Nicole DiPerna to our Girls Coaching Staff. Nicole most recently coached for the Royal Knights Soccer Club and West Broward High School as their JV Head Coach. As a former player, Nicole won a State Championship playing for Space Coast Storm and two State Championships and one National Title at Melbourne High School. Nicole then went on to play collegiately at FIU where she was a two time All-Conference player and the MVP of the conference tournament. Nicole currently plays semi-pro for our Team Boca Blast WPSL team. She will be coaching our Girls U11 Navy team.