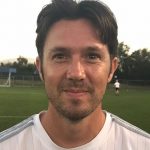 While coaching at Manhattan College, Galvin held the position of Director of Goalkeeping at Sports Domain Academy (SDA) in Montclair, N.J. During his time at SDA, Galvin was responsible for creating goalkeeping academy curriculum, developing goalkeeping trainers, evaluating goalkeepers, and educating and training staff coaches.

Prior to Manhattan College he worked as Director of Goalkeeping for the Columbus Crew Soccer Academy from 2007-10 while also serving at the Wellington School in Columbus, OH where he was the assistant coach during the 2008 season and varsity head coach for the 2009 season.

Galvin played collegiate soccer at UNLV, graduating in 2006 with a degree in history. He also holds an MBA from Florida Atlantic University.

In addition, Galvin will continue to serve as owner and Director of Coaching of the South Florida Goalkeeping Academy which provides high level goalkeeper training and summer goal keeping camps across South Florida.